10 April 2016: a day I won’t forget. It was the day my school had their wind band concert! However,  it took our blood, sweat and tears to be a resounding success.

I still remember the first time our instructor Mr. Ng announced the official date for this concert. I am a band member myself; and just like my fellow band-mates, I was shocked. At first, we feared not being prepared in time, for we only had around 3 (or less) months to practice and plan everything.

We started off by getting new songs and choosing the most suitable ones to perform. Then, without further ado, we scheduled as much time as possible for our band practice. In the midst of it, we looked for suitable students to run of the event and Mr Ng brought some professionals to help us with the concert. We had the opportunity to be taught by Mr Mitsuo Nonami, a very experienced music instructor and also Mr. Ng's instructor! We had to even practice during school hours but we learnt a lot from Mr Nonami - and if it wasn’t for him, we definitely wouldn’t have learnt to play those songs so quickly.

Around that time, we started to sell our concert tickets and also promote the event. Everything went smoothly and there were no complications. The band had huge support from our schoolmates and their families. As time flew past, we were done planning and had rehearsals. Days went by, and before we knew it, it was the day of our concert. 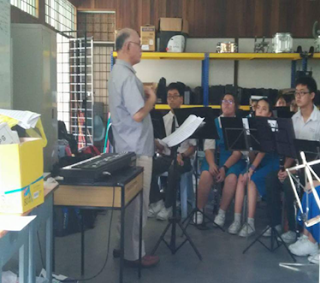 The venue of our concert was Experimental Theatre, Dewan Tunku Canselor in University Malaya. The concert would go on from 3.00-5.00 p.m. but the whole band was there at 8.00 a m! First, we familiarised ourselves with the place and set up our instruments. We did our final check-ups and rehearsal; and got dressed in our attire an hour or so before the concert. We felt a mixture of nerves, and excitement - all at once. I remember listening to the hosts welcoming the audience, as well as the ribbon cutting ceremony by our school’s principal.

As the first segment (which is the junior band’s performance) came closer and closer, my heart was racing and my mind was a mess. When the hosts introduced the junior band, we walked out and performed two songs which are “This Old Dude” and “Shake It Off”. The juniors were only first-formers and they only started to learn how to play their instruments at the beginning of the year. Hence, they were accompanied by some of seniors, myself included. It all went extremely well, much to my relief.

After that, it was time for the second segment, which was when the rest of the seniors joined us and the juniors left. This was also the time the VIPs arrived, accompanied by the drum line. Once the VIPs were seated and we started playing, all my worries and fears disappeared. I was engrossed in playing the wonderful music and I was enjoying my time, I focused hard on the score and the conductor to avoid any mistakes. It was finally time to give the audience our all. 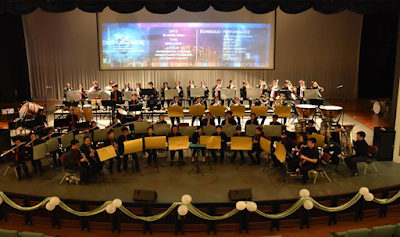 After each song, the audience would give us a round of applause and sometimes our conductor, which was also Mr Ng, would give short speeches of thanks.

Some of our songs consisted of more than us playing our instruments, as we also did some small actions along with it. For the last few songs, two of our school’s talented singers sang along while we played “Let It Go”, “Aku Cinta Padamu”, “Can’t Take My Eyes Off You” and “小幸运”. Besides that,  music videos were projected on huge screens in the venue while we were playing the songs. For the last song,  teachers and ex-band members stood on the stage, dancing and clapping. After the song ended, our concert ended as well. 2 hours went by too quickly - oh, how I felt like playing some more songs! 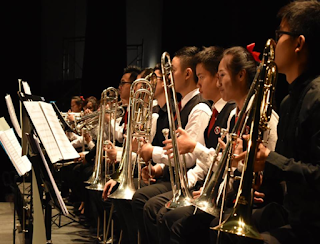 Everyone was soon scattered around the venue, taking pictures and talking with friends and family. We went back to our changing rooms to pack and clean up, and that wrapped up our day.

All of our time and effort was worth it. For some of us, it was our first and last concert - I definitely hope it was not, for me! I look forward for more - looking at the years to come in this amazing band with high expectations.

This was just the beginning for me, I am currently in Form Two, and I don’t feel like I was quite ready for the concert that happened this year. I want to learn more and improve myself even more, and I cannot wait for the day I can show people my full potential in music!

Music lifts me up in a way I cannot describe, and with this band filled with people who love music, this definitely isn’t going to be our last concert! The concert was a success, and there are more concerts where that came from!

By: Lim Sheanni
Posted by Be You! Tree at 15:46 No comments: Links to this post