On the 7th and 8th of April, the Librarians of SMK Bandar Utama Damansara (3) had a fun time during the Librarian Camp 2017. After school on Friday, all the Librarians changed into their Librarian T-shirts and waited at the library. Then, the camp started with a ice breaking game run by the committee members, which involved playing dodge-ball.

Then, we stood with our groups that we were assigned to. Soon, it was time for station games. We were given a piece of paper with clues that helped us to find our station. The clues would form a number and we had to call the number. The first group to call the number would win. 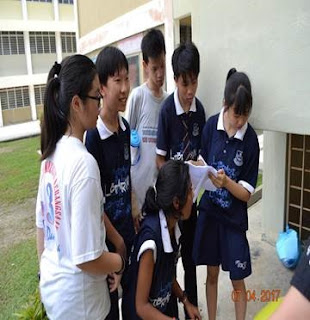 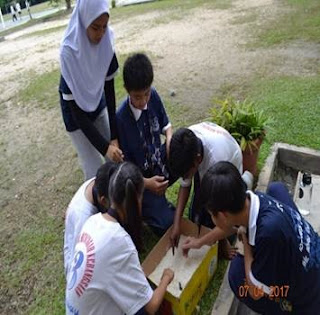 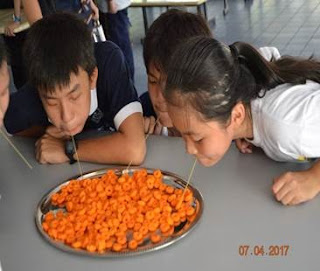 There were a lot of games - like blowing a ping-pong through the maze without touching the line, passing a long message to our group members but our legs are tied together making it hard to move, and many more. There was even a short game that was held within a given time-frame and it involved two groups that arrived to a station first. This game would help us earn extra points.

Unfortunately, we realised that some of us were stuck downstairs at the canteen and the others were at the Library. We managed to call the security guard and unlocked the staircase grille.
Then, we all went to the canteen to cook our dinner. All groups including the committee started whipping up dishes. You could see the Librarians showing off their awesome culinary skills.

After one and a half hours, we were finally done. We ate the food we cooked and it was tasty. There was spaghetti, fried rice, jelly, fruits and much more. After filling our tummies with food, we headed to the showers to take our bath.

Later, we went to the basketball court. We played some awesome night games. Soon, we had a group dance and drama performances. We had come up with a plot for our dramas using our team name. The plots were so interesting and we were totally immersed in their performance. Many Librarians showed off their amazing dancing skills.

Then, we had a dance party. We danced to the tune of songs till wee hours of the night. Since everybody was exhausted, we cleaned up and went to sleep. The girls slept in the Library while the boys slept in classrooms. While we were sleeping, the committee members were on patrol.

The next morning, we took our bath and proceeded to the basketball court. We had a small exercising session with Chloe leading us. Then, we had a game called 'Mr. Marcus'. It is a game where you are given a bunch of sticks and you have to order a song from one of the seniors and you are required to choreograph to the song. You will be charged a certain amount and you will have to pay with the sticks you have. Before we practiced, we had our breakfast that was mainly jam and bread.

After eating, we came back to the basketball court and started rehearsing for our dance. We performed in front of three of our seniors who would later grade us. 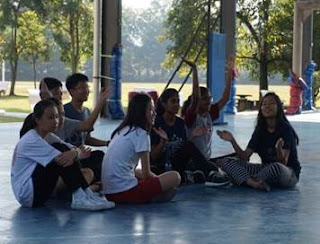 We were allowed to perform as many times as we want. A lot of groups used their creativity to choreograph their steps. The seniors were impressed by our skills. 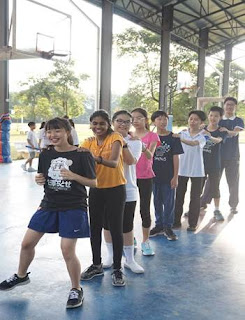 Then, we packed our stuff and changed into our camp T-shirts. We packed up and brought our stuff to the basketball court. After that, we were asked write a thank you note to our fellow Librarians. We wrote our heartfelt messages to them.

Then, the winners for our Librarian camp were announced. The marks were calculated based on the activities we had for the past two days - such as station games, cooking session, dance performance, drama performance and our points for the ‘Mr. Marcus’ game.

After the winners were announced, we took a group picture as a memento. This camp was so fun and I enjoyed it. I will never forget this camp and I hope we have this camp again next year.

A day spent with friends is always a day well-spent


By: Thivyashini Selvaseelan
Posted by Be You! Tree at 20:00 No comments: Links to this post

On the 2nd of April, the students of SMK Bandar Utama Damansara (3) participated in their annual Sports Day. Held at Stadium Sains, Universiti Malaya, this day was eagerly anticipated by supporters and athletes alike.

After that, Erwin Helmi was called upon the recite prayers. Next, athletes pledged to honour the spirit of good sportsmanship after singing the national anthem and the school song. Then, Mr. Kalearasu, the leader of the Parent-Teacher Association (PIBG) gave a speech, followed by a speech from Puan Zuraidah, our principal. The opening concluded with an entertaining set from the school marching band. 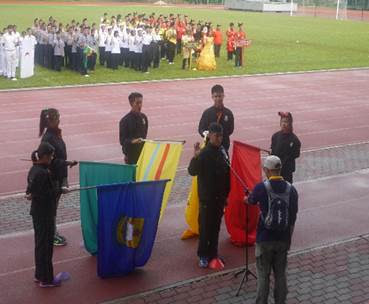 Soon, the events began. All the athletes were prepped for the event. The students who were not competing were enthusiastically cheering their friends on. A lot of events took place (mostly track) such as 4 x 100m, 100m, 200m and many more.

The teachers were working counting the marks atheletes have earned for their houses. A lot of athletes were tired after competing fiercely in their events.

Soon enough, the medal-giving ceremony heralded the end of the events. The students were eager to find our the winning house for the year. The athletes were beaming with joy when they received their medals. 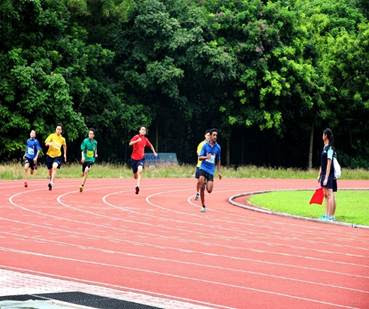 After much deliberation, the following were the results:

The best marching was won by Yellow House and Youth Cadet Corps. Overall, the winner was Blue House.

The Blue House athletes basked in glory, as Sports Day drew to a close. All the students went home with a smile on their faces, putting aside their sports house rivalries until the next year.


By: Thivyashini Selvaseelan
Posted by Be You! Tree at 20:00 No comments: Links to this post