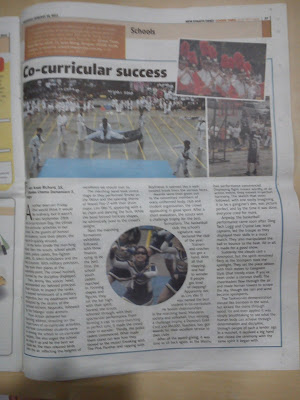 Another overcast Friday, it seems, but it wasn’t ordinary. The 28th of September marks Co-curriculum Day, the climax of co-curricular activities in school. As the guests-of-honour and students alike take their places, the march-in quickly ensued.

At the helm strode the marching band, then the scouts, school youth cadets, police cadets, fire-fighter cadets, St. John’s Ambulance and the Red Crescent. With military precision, they took their places at the assembly point. The crowd hushed as they were stunned by the discipline displayed.

Then, Jeremy Yeo, scouts’ head, accompanied our beloved principal, Puan Azizah, to inspect the ranks. It seemed reminiscent of a military inspection, but my daydreams were disrupted by the strains of the national anthem, Negaraku, followed by the Selangor state anthem.

After standing straight and firm, Puan Azizah delivered her opening address. She consistently stressed upon the importance of co-curricular activities, and how committed students are in driving the school to co-curricular success. She also urged the school to step it up to be the best we could be. Opening the ceremony, she released birds into the air, reflecting the heights of excellence we should soar to in her speech.

As the uniformed bodies marched out of the assembly point, the marching band took centre stage as they performed Smoke on Water and the opening theme of Hawaii Five-O with their drum major, Lim Wei Yi, appearing with a lei chain and dancing the hula. Whilst the band formed intricate shapes, he whimsically jived to the crowd’s delight.

Next the marching formations exhibition followed, with three finalists vying to be the best. First, the school youth cadets marched in. Forming shapes and figures, they set the bar high with their spirit. Second, the scouts whistled through, with their spectacular performance. From forming a cap, to cross-marching in perfect sync; it made the crowd cheer in wonder.  Thirdly, the police cadets commenced. What made them stand out was how they moved to the music! Sneaking with The Pink Panther and rapping with Boyfriend, it seemed like a well-needed break from the serious faces.

Awards were then given out to the committee members of every uniformed body, club and student organisation, the crowd applauding in good sport. After a short evaluation, the scouts won a challenge trophy for the best formations. The basketball club, the school’s signature, was declared the club of the year.

Trainers and coaches too got a hand. With all that clapping, one would wonder, do the people get tired of clapping? Apparently not; as Lim Wei Yi was named the best student in co-curriculum. He boasts chairmanships in the marching band, Mandarin society and volleyball, thus winning a challenge trophy, a Domino’s Gold Card and RM 300. Teacher, too, got awards for their excellent service to their clubs

After all the award-giving, it was time to sit back again, as the Wushu Dao performance commenced. Displaying fight moves worthy of an action movie, they moved with perfect sync. Next, a sketch soon followed, with one easily imagining it to be a gangster’s den. It was all picture perfect, and by the time it was done, everyone cried for more.

Anyway, the basketball performance ensued soon after. Ding Tech Logg and Crystal Lee, team captains, lead the troupe as they displayed their skills in a mock match. They also manipulated the ball to bounce to the beat. All in all, it made a good show.

Suddenly, the clouds cast a downpour, but the spirit remained fiery as the Stompers took the spotlight. They set the place ablaze with their moves to Gangnam Style (that trendy craze, if you’ve been under a coconut shell). The cheerleaders flew through the air and made human towers to scrape the sky, though the rain and wind became  a spoilsport.

Lastly, the Taekwondo demonstration flared at a high. They moved like bamboo in the wind, but kicked like stone through wood, ice and even apples! It was simply breath-taking to see what the human body can achieve through determination and discipline, through people of such a tender age. In a nutshell, it received a big hand and closed the ceremony with the spirit it began with.
By Kiwan Richard, 16, SMK Bandar Utama Damansara (3), Selangor