Student Highlights: Not bound by limits 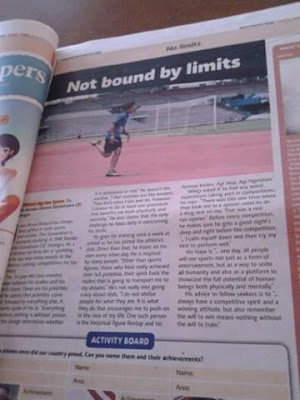 Ever since a young age, Jules Kinua Richard has always been gifted in both sports and studies. From his roots at Sarawak, he is currently studying in SMK Bandar Utama Damansara (3). He has entered in numerous running competitions, mostly in the sprinting category, and has won may awards.

The 14-year-old class monitor balances his studies and his talent very well. One of his favourite sayings is: "Everything has poison, nothing is without poison. Only the dosage determines whether it is poisonous or not." His priorities, come first followed by everything else. When asked about his routine, "... I feel that routines are like borders. They limit what I see and do. However I choose to do at least one procedure that benefits me both physically and mentally." He also claims that the only challenge he faces daily is overcoming his limits.

He goes for training once a week at school as he joined the athletics club. Other than that, he trains on his own every other day. He is inspired by many people but "other than sports figures, those who never really achieved their full potential, their spirit fuels the rocket that is going to transport me to my dreams."

When asked about any weird experiences while taking part in competitions, "there is one time when they brought me to a special room to do a drug test on me. That was a real eye-opener." Before every competition, he ensures that he gets a good night's sleep and right before the competition "I calm myself down and then try my best to perform well."

On the other hand when asked for who is his idol, "I do not idolize people for what they are. But it is what they do which encourages me to push on in the race of my life. Such as a historical figure - Rentap and his famous motto: "Agi Idup, Agi Ngelaban".

His vision is "...one day, people would see sports not just as a form of entertainment, but as a way to unite all humanity and also as a platform to showcase the full potential of human beings both physically and mentally at their best."

His advise to the younger generation who wants to follow the same path as him is to "...always have the competitive spirit and a winning attitude, but also remember: the will to win means nothing without the will to train."

This post is part of the line-up ahead of the blog's second anniversary. All these posts will be taken from articles written by students featuring the school on School Times, the educational pull-out from the New Straits Times.
Posted by Be You! Tree at 19:00