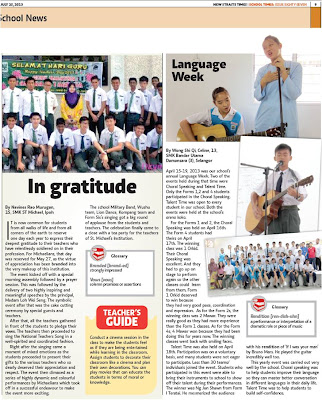 For the Forms 1 and 2, the Choral Speaking was held on April 16th. The Form 4 students had theirs on April 17th. The winning class was 1 Orkid. Their Choral Speaking was excellent. And they had to go up on stage to perform again so the other classes could learn from them. Form 1 Orkid deserved to win because they had very good pace, coordination and expression. As for the Form 2s, the winning class was 2 Mawar. They were really good as they had more experience than the Form 1 classes. As for the Form 4, 4 Mawar won because they had been doing this for years now. The winning classes went back with smiling faces.

Talent Time was also held on April 18th. Participation was on a voluntary basis, and many students were not eager to participate. Less than 30 teams/ individuals joined the event. Students who participated in this event were able to bring their instruments to school to show off their talent during their performances. The winner was Ng Jun Shawn from Form I Teratai. He mesmerized the audience with his rendition of 'If I was your man' by Bruno Mars. He played the guitar incredibly well too.