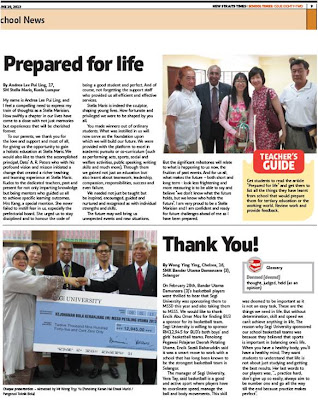 On February 28th, Bandar Utama Damansara (3)'s basketball players were thrilled to hear that Segi University was sponsoring them to MSSD this year and also taking them to MSSS. We would like to thank Encik Abu Omar Mos for finding BU3 a sponsor for its basketball team. Segi University is willing to sponsor RM12,945 for BU3's both boys' and girls' basketball teams. Penolong Pegawai Pelajaran Daerah Petaling Utama, Encik Sazali Baharuddin said it was a smart move to work with a school that has long been known to be the strongest basketball team in Selangor.

The manager of Segi university, Vera Tay, said basketball is a good and active sport where players have to coordinate speed, manage the ball and body movements. This skill was deemed to be important as it is not an easy task. These are the things we need in life. But without determination, skill and speed we can't achieve anything in life. When you have a healthy body, you'll have a healthy mind. They want students to understand that life is not just about studying and getting the best results. Her last words to our players were "... practice hard, don't give up so easily, always aim to be number one and go all the way till the end because practice makes perfect."